It is in those brave decisions that you become light. Light to you and a light to others. 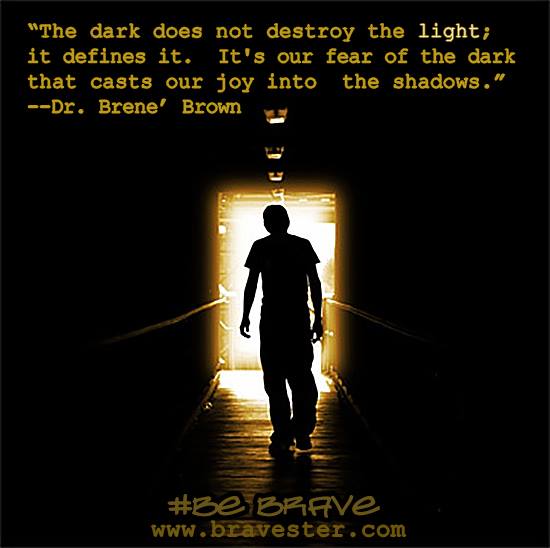 I know a beautiful soul who is the adopted daughter of a graduated teen of mine from a youth group in the 1980s. Cathy is a living story that is alive and brave.

Suicide and Me:  A Painful Confession

In January, I had Charity take me to the hospital. All of me was tired and done living. I couldn’t get out of bed. I missed work. Things were spiraling. They told me at the ER that I wasn’t acute enough to be placed in an inpatient treatment. They told me that because I didn’t actively have a plan and hadn’t attempted suicide they could do nothing for me.

Still I laugh at the word, “plan”. I’ve never needed one. Suicide to me has always been a struggle to not embrace the weapon of the moment. I’ve always felt that the danger was more in the every day. Running my truck off the road, taking all of my medications at once, finding a major artery; the how was never the hard part. There are a million ways to kill yourself.

A hospital told me I wasn’t acute enough for treatment and an outpatient therapy clinic told me my needs were beyond their scope. I felt unwelcome to find help and been made to believe that I don’t deserve it.

In February, I laid in the dark of my room and told God that I was finished. I told Him that I was ready to go. I felt as if I’d done enough, suffered enough, and failed enough.

In the last year I’ve been ignored, called a liar, been told I’m toxic, been abandoned, and lost friends and family; I’ve been made a fool. In the dark then and in the dark of my heart now, it is easy to believe that if I am half of what has been said of me that I’ve forsaken a spot on Earth. That idea grew into an inescapable reality. It has been chasing me and even when I get back up it threatens to knock me down again.

I’ve had to find creative ways to stave off dark thoughts. I even asked in a Facebook post if anyone would be willing to share pleasant memories of me. I remind myself that my mother didn’t have me for twenty three years, so she needs at least that many with me now. I tell myself that Charity doesn’t need to either find me or figure out what to do with my stuff. I remember how needy and worthless my dog, Shy, gets when I’m gone for a few hours and think of what it would be like for him if I never came home one day. I’ve begun therapy at my own expense, I take my medications faithfully and as directed, I go in for medical tests as needed. I’ve even been torturing myself with cardio. I’m doing all the things that you’re supposed to do.

But somehow this idea that I’m actually horrid, keeps after me. It keeps hounding me. It keeps me up at night. It beats my self-esteem into the ground and leaves it there whimpering until it dares to peek up from the dirt for a moment. It makes me second guess myself and everyone around me.

Because when something massive happens, like the end of a marriage, this beast that lives in the dark of my heart likes to just use all the hurt to prove its points:

Nothing you do is good enough.

You will never be acceptable.

You will never be lovable.

You will never be anything good.

You will always end up alone.

I told you so.

These lies now feel as if they have a body of evidence to prove them right and if they weren’t the truth, why would there be proof? As backwards and easily refutable as the proof is, it still feels real because I know that it’s true in the hearts of people who used to think otherwise.

Everything I can do to shut up the beast, I try my hardest to do. Sometimes I fail. But the stakes are too high. Suicide moved into my heart when I was a very little girl and I tried to kill myself. It never moved out. When I began cutting at age thirteen, I knew that I was taking my life into my own hands. Every time after the first time I knew it too. One occasion, I even hoped to die from it. When I was alone in Missouri last fall Charity asked me how I was feeling and I said, “Like I want to drive my car off a bridge”. She told me she was worried, because she knew that deep down I wasn’t joking. I wasn’t joking, not even at the surface.

For almost twenty years I have battled back and forth with thoughts and actions of suicide. Remembering that it doesn’t go away, is what I would ask you to do for anyone who has ever struggled with suicide. It never goes away. It gets quieter, it shuts up for a minute, but it never ever goes away. Be patient with us. Don’t just be patient now. But be patient and vigilant always.

There is no before and after, then and now. When the lights go out, there is always the dark. Please remember to recognize the darkness and be a light. Please. You could save someone’s life. Mine has been saved more times than I can count and yet the beast is still there, waiting.

My Proclamation of Faith (When My Life Does Not Make Sense)

Light and Darkness Are Not Equal