I have always struggled with the idea of God feeling any real love towards His creation. Through the influence of certain churches and individuals, I have always seen God as a toymaker; He creates us for his own personal pleasure, but feels no genuine love towards us, and does not see us as having legitimate feelings or emotions.

I used to worship a toymaker. Today, I worship a Father.

It’s funny how it happened.

In early August 2017, I experienced a crippling depressive episode. This is something that strikes me about once a year, usually without an obvious reason or warning. My usual way of dealing with it is to simply ride it out and wait for it to disappear on its own. Since it always has no clear trigger, I assumed it had no clear solution, either.

My solution for war was to start writing a novel. Writing has always been an area of strength for me, and has proven to be a good mental escape in the past. The reason for this is two-fold. First, by cultivating a natural talent, I am able to resist certain negative beliefs about myself that feed those depressed thoughts. Second, when you are the author of a story, you can control the narrative, create events that are to your liking, and bring about an ending that satisfies you. In the midst of mental pain where everything feels out of control, this is a good stabilizer.

When creating a story, you must also create characters. My book has many characters, but I am particularly fond of one of them.

I had an amazing time creating this character. After playing with a few ideas, I came up with a character that I can only describe as “a riot.” He is the kind of person that everyone would love having around in real life. Even though he exists only in my mind and on the page, I am proud of who he is, and he brings me so much joy every time I work on this project.

It was here that God turned this project from a simple coping mechanism into a priceless gift.

While contemplating a scene that this character is involved in, I suddenly paused. A thought had just hit me. If I—a fallible creation—am feeling this much enjoyment and pleasure out of creating someone who does not actually exist, does God—the source of life and creation—feel the same pleasure when He creates us, who do exist? Does He look at His creation with the same sense of pride and love that I feel towards these fictional characters that I have created? What if God is not really a toymaker, but is actually a father who creates us out of love and relates to us as His family?

The force of this realization was overwhelming. I dared to believe that God saw me in the way that I saw this fictional character. The result was a feeling of peace in my soul that has never been there before. Over the next few weeks, I ran this “insight” by my counselor and a few friends. All of them were simply floored to hear this coming from me, and the response was overwhelmingly positive. In the words of my counselor, I finally realized that I have a Father in heaven, whose love is real and His intentions are pure.

About two weeks ago, I attended a packed concert with Chris Tomlin and Matt Maher as the headliners. One song that spoke to me personally was “White Flag,” and specifically the line: “We raise our white flag / The war is over / Your love has come / Your love has won.” I think this describes my situation perfectly. For so long, I had been in a certain war with God because I saw him as a narcissistic megalomaniac.

Today that war is over because God’s love has finally defeated that image and won me over!

Through this experience, my perception of God has changed completely. Before, the love I felt towards this toymaker was quite precarious—like a spiritualized Stockholm Syndrome. Now, I can’t help but love this Father.

Note from Brenda:  I know Jake Stewart. I “get” Jake Stewart. He is living such a wonderful story because he has decided to live. When he told me about this writing project, and what this writing project was about, my first thought was, “oh boy…he’s going to dig into something big here and won’t see it coming.” Never in all of my imagination did I guess it would be something so personal. God shows Himself as personal again. All because Jake decided to “war.” A brave life means we can write our own daring endings. Jake got one. 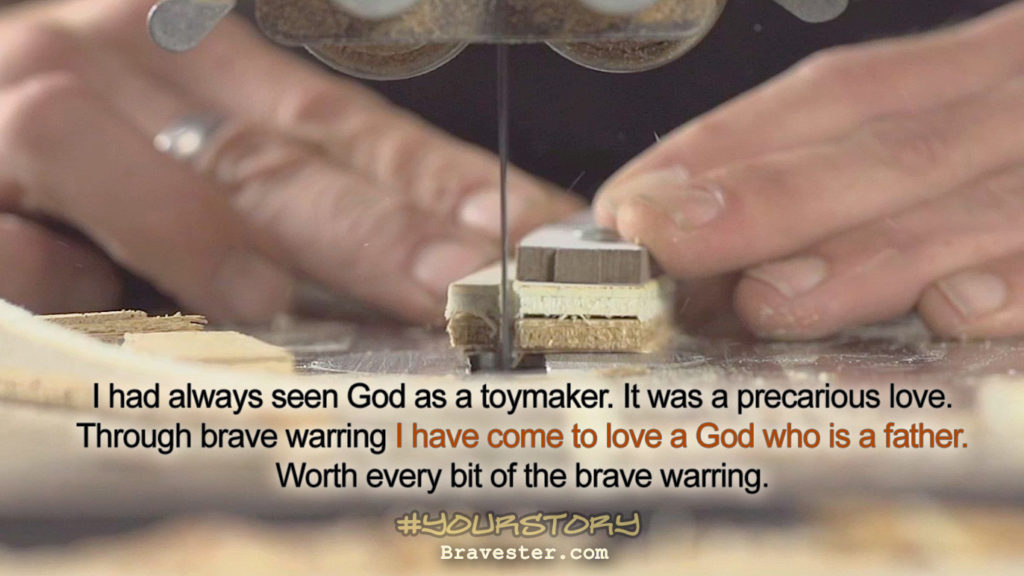 When God Gets Personal