As I’ve said in this series, I’m a Matthew version of Holy Week person. In my church we are doing a deep deep dive on Holy Week from Mark’s version. But in my daily Bible reading I ended up in Luke for Holy Week. And this part of Luke gave me a giggle:

But very early on Sunday morning the women went to the tomb, taking the spices they had prepared. They found that the stone had been rolled away from the entrance. So they went in, but they didn’t find the body of the Lord Jesus. As they stood there puzzled, two men suddenly appeared to them, clothed in dazzling robes.

The women were terrified and bowed with their faces to the ground. Then the men asked, “Why are you looking among the dead for someone who is alive? He isn’t here! He is risen from the dead! Remember what he told you back in Galilee, that the Son of Man must be betrayed into the hands of sinful men and be crucified, and that he would rise again on the third day.”

Then they remembered that he had said this. So they rushed back from the tomb to tell his eleven disciples—and everyone else—what had happened. It was Mary Magdalene, Joanna, Mary the mother of James, and several other women who told the apostles what had happened. But the story sounded like nonsense to the men, so they didn’t believe it. Luke 24:1-11.

Oh men… I’m not a man-hater but this made me giggle. It sounded like nonsense to the men. What is the original Greek of this sentence? I’m not a Greek geek so I am treasuring the simplicity of this.

Then there is the how the women were named. Not only did the men who wrote the Gospels speak the truth and shared that it was the women who first found out that Jesus meant what he said that he would rise from the dead (a woman’s testimony wasn’t even considered legally binding in those days), these women were named for all of history to know.

Meanwhile the men were described as being nonsensical. Giggle.

Then there is Peter. Oh Peter. When one who knows the Bible stories mentions Peter, it is always with this roll of the eyes. I love how this Luke version of Easter morning and how Luke mentions Peter by name and continues to give us this same character view of Peter.

However, Peter jumped up and ran to the tomb to look. Stooping, he peered in and saw the empty linen wrappings; then he went home again, wondering what had happened. Luke 24:12.

Then in Luke 24 we get this wonderful truth about scars again. We got the story of the two men who walked on the road to Emmaus who also discovered it was Jesus who was with them when he revealed his scars. (Luke 24:13-34). Even that story ends with another “oh Peter” moment. There they found the eleven disciples and the others who had gathered with them, who said, “The Lord has really risen! He appeared to Peter.  v. 34. Luke (and those he interviewed) didn’t mention the women maybe because of the shock that Jesus appeared to Peter, of all people. That Peter. The one who cursed out a teen girl because he was afraid the night Jesus was arrested.

But then where were the other disciples? They weren’t even in the vicinity. It’s easier to expose Peter’s weakness than to share that they were in the next county over. Or wherever they hid themselves.

Further in Luke 24 we get this truth yet again—that Jesus is seen in his scars.

It is in the scars that Jesus is easiest to see. 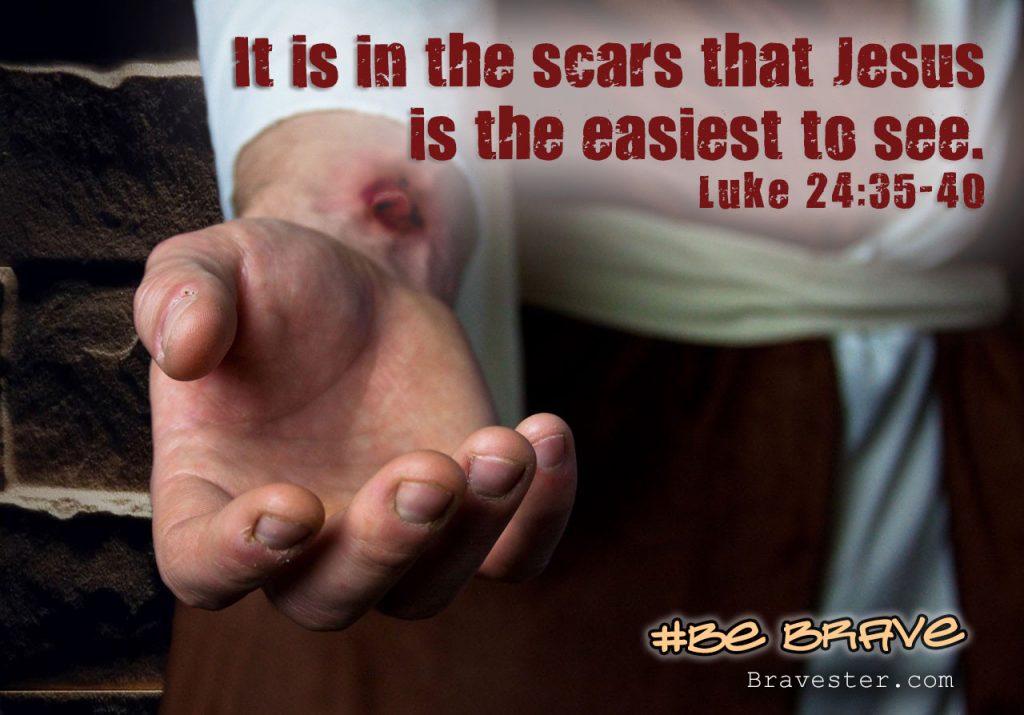 A scar is a healing. After injury, a scar is what makes you whole.

These scars kicked some holy butt in the fight of all the ages and gave us an Easter morning! The scars live so he can show us them so we can see him the best.

So we get to joyfully celebrate this Easter morning. Because we are worthy to have this joy.

Women, we found Jesus and are acknowledged so as worthy. We always were.

Men, Jesus reveals himself to you along the way all the time.

And to the screw ups like Peter, you are always a part of the redeeming story. We can’t get enough of you.

Happy glorious Easter everyone! May this Easter be personal to you. Be brave.