The past couple of days I’ve been overwhelmingly grieved. First was the shooting of Alton Sterling in Baton Rouge, Louisiana. My immediate thought was, “Not again?!” The video was grievous. Then the shooting of Philando Castile in Falcon Heights, Minnesota. I grew up in Minnesota. I know where Falcon Heights is. I drove through there just in May on my way to my nephew’s condo. And there is video for this one too. You get to see the face of death.

I’ve been so grieved. I’ve been praying while walking, while driving, while thinking, while sleeping. I’ve known about this long-realized problem. I’ve raised my favorite young men and this was/is very much a fear.

Then the sniper-shooting of police officers happened in Dallas. Can the world get any crazier?

I guess the world can get crazier. The next day there were three more shootings of police officers in Georgia, Missouri, and Tennessee. In Minneapolis two toddlers were killed, victims of a drive-by shooting of gang-on-gang crime. Two toddlers who were riding in their father’s car! I’m sure there was more gun violence deaths I do not know about. Will my boys be safe? Will police officers be safe? Will I be safe?

Out of my grieving and praying combo of the last couple of days, I remembered this quote from Fred Rogers.

When I was a boy and I would see scary things in the news, my mother would say to me, “Look for the helpers. You will always find people who are helping.”

I started to look for the helpers.

I began thinking about the thousands and thousands who regularly intercede in prayer for America. Could it be their prayers have paved the crazy way for technology to be developed so that video on phones and body cameras on police officers and dash cams now expose this awful American problem to the light? I believe their prayers have brought this problem to the light. I really do.

Have you seen any of the press conferences given by Police Chief David Brown of Dallas? This man is a self-proclaimed man of faith. I believe his entire life has been led by God for such a time as this. May God continue to give him the wisdom to lead us all through this aftermath and into true healing. The prayers of the intercessors are already leading us to this.

Then there are the thousands and thousands of police officers who do serve their communities well—with passion and compassion. These are helpers.

On my book pile long before the events of this week has been this book, Just Mercy by Bryan Stevenson. It is the autobiography of a helper in the form of a lawyer helping bring justice to those on death row. This book contains names of real people, besides Bryan Stevenson, who have been working for justice for this same problem since the 1980s. These past few days I have needed to read the true story of helpers.

I have been looking for the helpers. It has helped the world not seem like such a scary place. The helpers greatly outnumber the bad few. I have decided to not watch the news. The news has become pure crazy talk. They are not looking for the helpers. They are looking to divide us. And cause fear in us. I’m limiting my time on social media. There is a lot of crazy talk on there too. Stuff that I don’t know to be true or Snopes.

And I continue to pray. I read this recently:

I don’t need to enter into the rhetoric about these events. I need to become softer. I need to pray more. I need to look at everyone who walks by me, look them in the eyes and smile at them. I pray people do the same to my grown sons–and every police officer.

Yesterday in the morning aftermath of Dallas, I put on my Facebook wall this quote by Dr. Martin Luther King, Jr.:

I declared with that quote that “Today I will pray and love.” That is bravery in these scary and grievous last few days. That is becoming softer. Please join me. Prayers got us here, and here is not comfortable at all. Prayers and love will get us through. 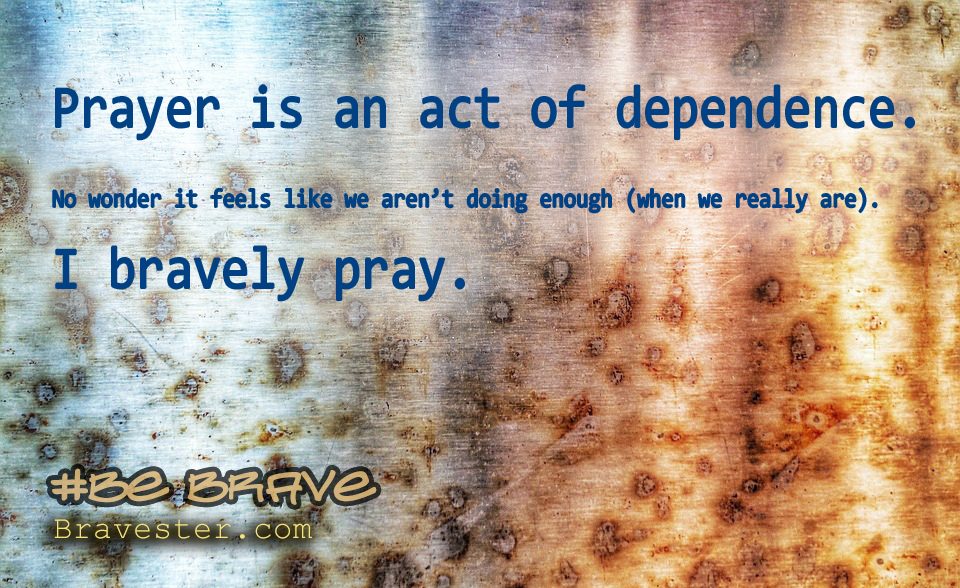 Fear Does Not Protect You