Jesus healed the woman with the disease that caused her to bleed. Not much is known about this woman. Not even a name. But what this woman did remained clear in people’s minds. Three of the four gospels have recorded what she did. They missed her name but they did not miss what she bravely did.

First some-back story about this woman. For twelve years she suffered from some disease that caused her to bleed. For twelve long years she suffered. If I suffer past a couple of days people hear about it. God hears about it. My husband hears about it. My tolerance level for suffering is rather low (though growing as I’m learning to embrace a life of vulnerability yet I still whine). I am sure that this lady had reached her tolerance level years earlier.

But one day out of her years of suffering she heard that this Jesus was coming. Perhaps. Maybe. Do you think He could heal her? Could this living misery actually come to an end? If only… She had hope.

So she braved her face and left her home where she had locked herself into this small world to live in her misery by herself. Jewish customs required her to live in this shack. But who had truly put her into this shack? The customs or her misery?

Upon leaving her house her hopes were crushed. The crowds around this Man were enormous. She would never be able to get through the crowds. And if she did, how would she get His attention? But this was a desperate situation. The tension of hope was rising within her. She was finding Plan B. “She said to herself, “If I can just touch His clothes, I will get well.” (Matthew 9:21) If only…

She was healed. With her disease she risked the chance of being stoned to death just for leaving her shack. Yet the tension was worth it to her. Just to touch His clothes (her Plan B). She dared to touch Him and He responded out of the loving relationship He wants to have with each of us.

So why does my life fall too often into the comfort of the “suppose to be’s” complaints?

God, I’m living for you so this is suppose to be…

Or My direction for my life is suppose to be…

Or I’m suppose to be married by now.

Or I’m suppose to die before my son dies.

Because there is discomfort in living in holy tension. It feels better to move through any tension quickly. Whether to move through it in a speedy way—that may short-circuit the work of that tension—or to divert out of the tension or to numb the tension. All three are options people take all the time. Do you?  How many bad decisions have you made trying to get out of that tension?  This is often the place where regrets happen.

And I always add the word holy to these tension times. Because they are holy. These are those times when God appears to be near as we live in this tension. Something holy is going to happen.

I’ve been talking with a young man lately. He has a heart-question which at times cripples him, sometimes to despondence. He wants to know why he was born. He is afflicted with some mental issues which he believes burdens those who love him. They definitely are insurance burdens. Plus his mom, who is now deceased, said he should not have been born.

My advice to him is to question away. Ask God that question over and over again. Live in the tension of that question. Push through the tension to try to touch Jesus’ hem. This tension may last for 12 years—or the rest of his life. Truth is I don’t believe Paul was ever cured of his thorn in the flesh so he had to continue to push through his tension every day he lived.  (1 Corinthians 12:7-10).

I also advised this young man to read Job. I knew he would identify with Job’s whining misery. The result of Job’s list of “suppose to be’s” was God responding with question after question. No answers. No insight. No answer to the “suppose to be’s” that Job had listed. Just questions. But here is the greater truth: God responded. God will respond to this young man too.

To get this blessing of a response, you have to stay through the holy tension.

Dr. Brene’ Brown calls this The Rumble. Once again her research brings me such joy and confirmation. I’ve been teaching and counseling my loves to live through the holy tension for many ministry years. Now I find out there is research to confirm this.

Back to our unnamed heroine. Jesus did more than respond with a quick and anonymous healing. That was what she thought was enough. Jesus also turned to her and said, “Take heart…” (Matthew 9:22). He cared enough to ask about her heart, to listen to her story, even if it dragged into her whining misery. For her she found someone who actually asked to hear her complaints–even though Jesus was on His way to heal a dying girl. There was urgency in the air. The crowds were rushing Him, pressing Him, insisting He keep going before it was too late for the girl. But this woman’s desire to move beyond the “suppose to be’s” caught Jesus’ attention. She was healed and still Jesus stopped to listen.

But Jesus did even more than that. He responded by calling her “Daughter.” “Jesus turned and saw her. ‘Take heart, daughter,’ he said, ‘your faith has healed you.’ And the woman was healed at that moment.” Matthew 9:22. It’s the only recorded time that Jesus addressed someone that way.

If Jesus’ desire was simply to heal her, He could have kept walking after she touched Him. Jesus had reason to keep moving–if that was all He was concerned about. He didn’t have to stop, talk, and listen. But Jesus did all those things. He wanted to let her talk, to tell her story, to be heard by someone. And He wanted to call her “Daughter.” Perhaps her heart was healed also?

Despite her physical healing, she probably would have continued to stay holed-up in that shack. She could have continued to carry her shame even after the healing. Twelve years can do some mind-damage. But once you’ve been called “Daughter” by Jesus, you walk in a new way. This all happened because she pushed through the “suppose to be’s.” She pushed through the holy tension and was called “Daughter.”

Living through this holy tension needs to be active in our personal lives. What are the “suppose to be’s” that hold us back from truly knowing our calling, our giftings, our quirks that make us unique to be used by God? Why were you born for such a time as this? Living in that holy tension is not comfortable. Vulnerability is required. It also contains times of failure. And pain.

But to push through…

You can write the ending of what that would mean to your life. Bravery means we can write our own daring endings. 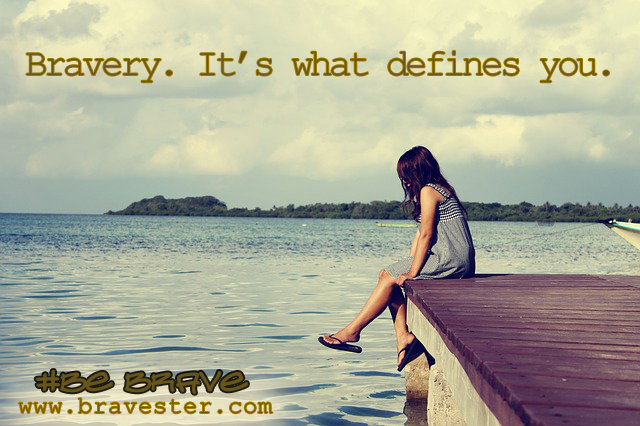 It is Dangerous to Hope

Living in Vulnerability—This is Basic (Yet So Scary)