I’ve been a woman in ministry since 1981. It started with wanting to date a guy who owned a Corvette who was also a Christian who attended this other church. Somehow someway leadership saw something in me (that guy did too, at least for a couple of months!) and gave me responsibilities which it turns out I loved. Eventually I left that church and those people (sigh) to get my education as a minister and I worked at churches throughout that education and have ever since.

I have no other work identity than as a pastor. I have hardly any adult memories that are separate from this identity as a pastor. This is who I am. Who I was created by God to be. Still.

Amazingly somehow the Men of the Church have never stopped me from being who I am. I do remember some rude men. I had a few who thought a sit down was needed with me. But they were outside my sphere of influence so that sit down was just miserably uncomfortable. One of my professors of theology literally told me, as I sat across his large desk, that my best path to be in full-time ministry was to get married to a pastor. That one conversation drove me to not want to date pastors. I certainly didn’t marry one!

I’m sure I’ll never know how many retreats and camps and conferences I never booked because I was a woman speaker. But I have booked others. I know there is this Men of the Church machine that has hurt many women. I have also had many wonderful Men of the Church who have mentored me and opened doors for me, particularly in those early days. I have either been blessedly oblivious or spared. I think it may be more oblivion. My drive to be in ministry has always been that strong. I just knew what I had to do to answer this call on my life.

This is where my brave life started. This is when I started living a big faith. A Wild Frontier faith. I have from the beginning been all in on this call on my life–including the losses of relationships and income (!!!!). I did 15 years of this single and boy oh boy do the Men of the Church want you to get married so you become “safer.” I’ve grown to live with this broken heart that has dared to love and dared to forgive and have continued to believe in the goodness of people and the power of God to help those people live in their designed goodness. I’ve embraced the vulnerability, the necessity of victory and defeat. I’ve wrestled with God and have been disappointed with God. I have found this vulnerability of both victory and defeat has given me a brave outlook on whatever comes my way.

When it comes to women in leadership in the Church, I’ve heard it all. I’ve lived it all. It’s part of my brave life.

But I’ve learned something else. Something beautiful I just have to pass on. It’s from this article written by Jessica Leep Fick who according to her bio is a writer, speaker, and Evangelism Resources Director at Stonecroft Ministries living in Kansas City, Kansas. In this bundle of truth she began with this oft-quoted part of 1 Corinthians (NIV):

Just as a body, though one, has many parts, but all its many parts form one body, so it is with Christ. For we were all baptized by one Spirit so as to form one body—whether Jews or Gentiles, slave or free—and we were all given the one Spirit to drink. Even so the body is not made up of one part but of many.

There should be no division in the body, but . . . its parts should have equal concern for each other. If one part suffers, every part suffers with it; if one part is honored, every part rejoices with it. 1 Corinthians 12:12–20; 25–26

Then she shares this beautiful truth for us women.

I want to draw your attention to the verses put in italics (which I put in purple). This passage talks about the unity and diversity of the body of Christ, beginning with what would happen in the body if each part wanted to be something different or to just leave the body. The first italicized verse says, “But in fact God has placed the parts in the body, every one of them, just as he wanted them to be.” Reading this verse it was as if Jesus said to me, “Jessica, I have placed you exactly where I want you to be. It is not a mistake that you are a woman. You aren’t a loser. I have placed you just as I want you to be right here and right now.”

Yet I continued to pray and question: But Jesus, what about all the dudes who can zoom ahead in their careers because though they might have young children they aren’t the ones breastfeeding the baby? Why am I not getting the same opportunities? What about the fact that women have actually been described throughout history as “the weaker sex”? This is not cool.

He answered me in his Word: “[The body’s] parts should have equal concern for each other. If one part suffers, every part suffers with it; if one part is honored, every part rejoices with it.” The Lord seemed to speak from the page: “My church is suffering because my daughters are suffering.” Source.

Yes, the church is suffering because the daughters are suffering. This hits me as painfully true. When the men who opened doors for me weren’t available for me, my presbytery betrayed me. Their fear of my ordained ministry caused them to sin against me. I healed and went on to serve 25 years at my next church. The sin still stains though.

I just want you to know that today. From the Bible. This is the truth of who you are and God has a big picture planned for you. You who is called by name. Worthiness is your birthright.

Worthiness is my birthright too. I believe that about me too as I just started Year 37 in ministry. The Men of the Church are still around. Some other unfavorable circumstances are still around. But I will plod on. It is all my soul knows to do. My brave life will continue because this truth applies to me too. 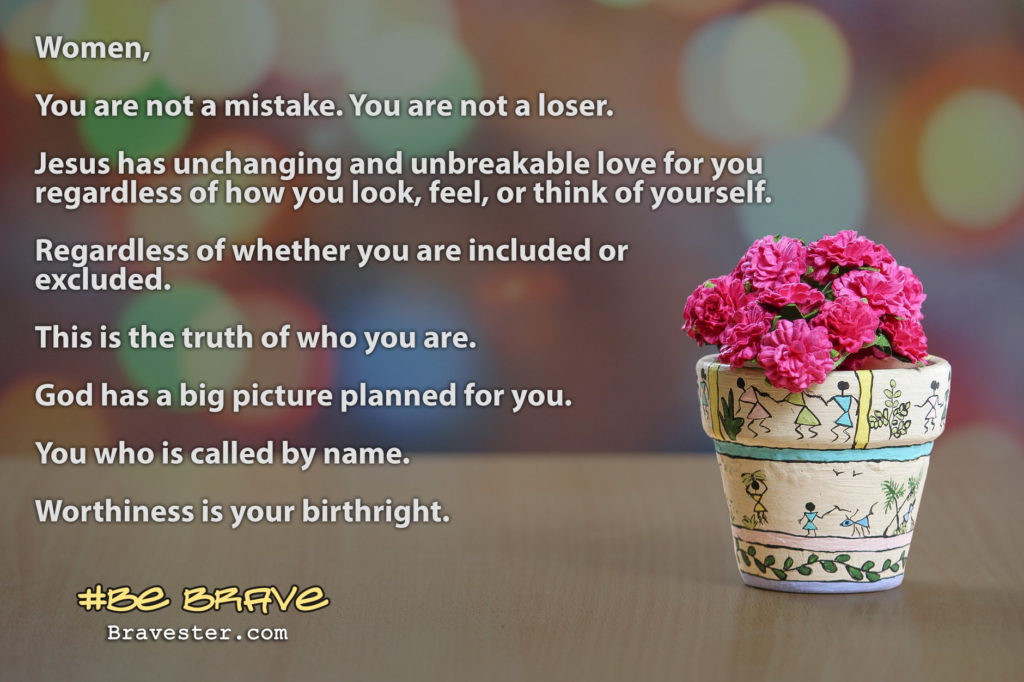 Maybe Someday We Will Have a Real Dog

Why Do We As Women Not See Our Own Gifts?