This is John’s and my dog Louie. I shared the story of his adoption. He was a very sad dog to adopt with a lot to overcome. He rarely barks. He does not play. We think Louie doesn’t even know how to play and we have given up on that ever being learned. It took him nearly two years to bond with me at all. He bonded with John within three months. So obviously his previous owner must have been a woman. It took him months to cross a threshold of a bathroom. Obviously he was abandoned in a bathroom. He was a tiny shaved-down dog when we adopted him because he was found and trapped on the streets and was found covered in feces and urine. 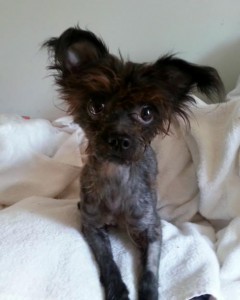 Sixteen months after we adopted Louie—and progressed quite far with him—he was out on a walk with me and was attacked by another dog. He was grabbed by the neck and rag-dolled and nearly killed. His trachea was punctured and there was lots of blood. His pelvis was also broken. Surprisingly this traumatic situation did not set back Louie in his healing process. It was like when we returned to claim him after his hospital stay, he did not expect that and decided to trust us more.

Six months later he was run over by a bicycle. Both wheels. Right over that healed pelvis. Surprisingly his pelvis was not further damaged nor was his emotional stability.

Louie has grown into a relatively happy dog. His happiness has a limit though. It just takes a wrong move or a random noise and he scampers as quickly as he can to hide under something. There is no common sense in this behavior. His fears, we believe, will always interfere with his happiness. 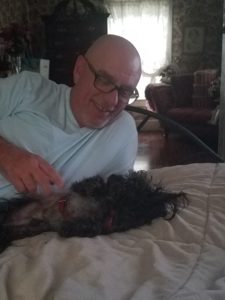 The average day in the life of Louie

The other night this dog who does not bark woke us up howling. Howling! Louie may have had his 6-pound self sleeping between John and I. From his deep sleep, he howled. It was a full throat and gut noise. Remember he rarely barks and when he does it is a muffled bark. Louie didn’t even wake up. Somewhere deep in his sub-conscious Louie knew he was a real dog.

Same with you. Deep in your sub-conscious you know you are worthy of the life you have been given. You are worthy of connection and belonging. This is why you are making each of those brave decisions to change your path. It is hard and painful. But you know deep down that you belong. You know that worthiness is your birthright.

Continue on being slightly braver. You may want to even howl a bit, as long as it comes from deep inside of you. Or full-on laugh.

The Silliness of Finding Your Soul Mate