in 2015 I experienced the longest 22 days of my life. At least that is how it felt. It all began with our grown son canceling a breakfast with my husband and then us receiving a phone call the next morning from a detective looking for him. Our beloved son—whom we could see was sinking back into his shame despair—then became a fugitive for 22 days. The kind of fugitive that makes the 6:00 news and every other media source. I became the mom who received the phone call, “I saw him on the news, are you okay?”

I was not okay, not that I could answer the phone. After a few days I braced myself for the news that he was dead. He is not a smart criminal so the fact that they couldn’t find him led me to believe that he permanently wanted to not be found. I was also convinced that his shame despair was looking for “suicide by cop.”

Suddenly one day he was found and arrested just one neighborhood away from his birth father’s home. He was hardly hiding. And we have no idea why there was so much media press to find him. Most of his charges never stuck to him because he—knowingly so—committed crimes with also dumb criminals who all committed crimes against each other. None of their stories lined up or made any sense so it was only the probation violations that stuck.

Now we are in the midst of a seven year sentence. He’s alive. He’s beautiful.

I am changed. I feel like I have a braver heart, yet it is also calloused.

I started Bravester with the plans in motion before my son became the “fugitive of the week.” The story of my life since becoming a Christian has been daring God and living life beyond my supposed-to’s. I’ve carried that attitude with me into nearly 40 years of ministry. I’ve carried that attitude with me in my dating which led me to marry a great man who also has no problem daring God and living beyond his human limitations. (John is a great story!) I’ve continued living this way during this current season of all the vulnerability that loving my sons requires, through moving to a new church after 25 years at one church, through dealing with the court system yet again.

I have learned from years of God’s faithfulness that I do not need to fear feeling vulnerable but that I can brave up and walk into it because God always carries me through. When you live such a daring faith, you grow to have no doubt about this.

But I am calloused. I still remember the pain of those 22 days—and the rage of anger that followed for months at my son. I don’t want to feel that pain again. I don’t know if I can handle feeling that pain again. I am conscious of this callousness. I’m hoping that my awareness of this is keeping me in the hope that I’m not withdrawing from people because of this fear of pain. But I do feel the hesitancy to share my story, to hear other people’s stories because I don’t know if I can handle feeling their pain. I’m a bit withdrawn.

This I also know. Time is a healer. I’m some years past this and one day it will be many years, then ten years. I doubt now that this will ever become a blurry memory but maybe it will. I remember being so broken-hearted 30 years ago thinking I would never recover and now I don’t give that life story much credence in my life. Back then some poor character people (as proven over time, there is that gift of time again) attacked my character and I’m still standing. Standing and growing and having taken on some big love challenges since then.

Hang On Pain Ends is an acronym for hope. With my calloused heart I do still live in hope. Hope for the Plan B in my son’s life. Hope that I will continue to live in vulnerability and bravery so I can continue to have great stories to tell—particularly stories that end with broken people finding the faithfulness of a loving God who has never left them. Because this is what I have learned.

It may come from a more calloused heart these days but this truth has never changed.

At the end of Job’s disaster, he said “I had only heard about you before, but now I have seen you with my own eyes.” Job 42:5. Pain does have a way of showing us God in all truth. This is why pain is our beginning. I will never be able to unsee God’s faithfulness to me each daring time I put myself out there. I know God is beautiful.

Maybe you don’t see God that way. But from this calloused broken heart, I have learned this and cannot live any other way. 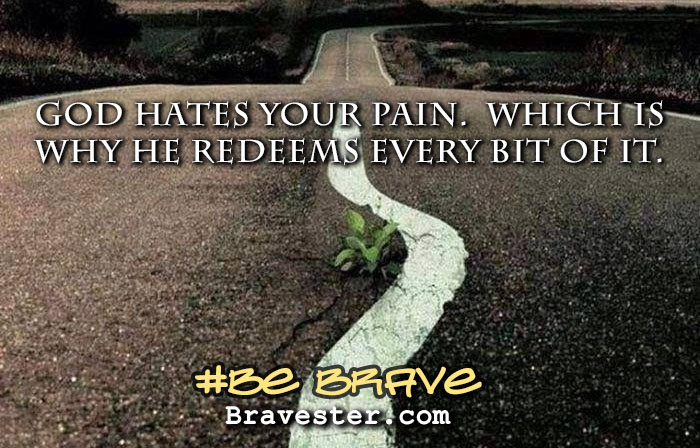 Sometimes, our suffering can be redeemed and made useful, our torn heart suddenly opened into a passageway for receiving and returning love.